The art of travelling without a plan

The art of travelling without a plan

Some people absolutely have to live by a plan - but that is just not me.

I know many travelers who must have a series of notes, scheduled timeframes, to pre-book tickets, have everything written down in notes so they don’t miss a thing.

I ideal of travelling is really just get on the plane and see what happens. It’s good to have a couple of destinations in mind like the iconic landscape that you really want to see, a few things to tick off the list to tick off the bucket list perhaps, but apart from that I prefer to just sort of make my own way as I go along.

One example of 'making no plan' and 'turning up' that changed my life was how I ended up in Nepal.

I was travelling with my boyfriend at the time, down through Thailand Malaysia and Singapore - the ultimate destination for us was Indonesia.  While sat in a beautiful restaurant in Singapore eating the most delicious Thaali I have ever had, we decided that we would flip a coin to help us choose whether we should carry on with the plan, or change our mind and going completely the opposite way, to somewhere that he had always wanted to visit.  Nepal. So we tossed the coin it came up Nepal, we organised two flights a day later and off we went.

As soon as we hit Kathmandu we went to a photo slideshow (showing my age now...) with incredible photographs of the amazing Annapurna Circuit. As we had decided just three days before to even go to Nepal with no research, we had no idea apart from mountains what really awaited.

We met a chap from the Netherlands, a Canadian lad, and a young man from Bristol who just met each other a few days before and were planning on hiking the Annapurna Circuit, so we thought 'why not? Let’s just join them!  By the way, what IS the Annapurna Circuit anyway?...'

We had no Guidebook we, no idea of what we needed, were out of shape and practice for hiking.  We had some hiking boots but pretty much nothing else so we had a crash course quickly and what we needed for this epic trip which would be three weeks of hiking around 300 km through some of the world’s highest mountain passes.

Now, you should know, I had at that point never been to the mountains before. I mean I drive past them on the way to Vienna once but it’s really not say not the same. So we set off into Kathmandu on an emergency purchasing expedition of some thermal underwear, a very lightweight sleeping bag, some iodine tablets to purify water, purchased a bus ticket, a permit to do the hike and off we went.

Looking back on it now I absolutely must have been mad. There were so many times during the trek that each and every step up those bloody hills seemed like such an ordeal, and I thought to myself 'why am I doing this - this just doesn’t seem like any fun whatsoever?!' - but then I look around me and the mountains were just there - so magestic.  The peace so uninterrupted.  No cars.  No TV. Fresh air like I've never experiences.  I survived the Annapurnas unscathed (pretty much) - went over the Thorong La pass, skidded down to Muktinath, walked all the way back to the valley below three weeks later. 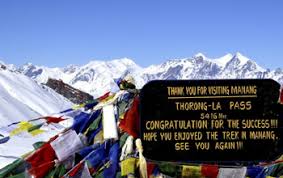 I simply wouldn’t get to experience such splendour if we hadn’t just made that spontaneous decision. This is not to say in any way that making a plan to do any of this is not a good idea - all I’m saying is don’t be worried if you don’t have a plan sometimes stuff just happens and those kind of things you really can’t prepare for it. I know that if I had considered it and done some research into it, knowing my inexperience I probably would have turned talk myself out of it. Just by taking the opportunity in front of me I ended up having a life-changing experience and which started love affair with the mountains for me that’s changed my world.